IQ is proud to introduce our newest member, Matt Clarke, to the roster of diverse and talented filmmakers that form the IQ community. A UK native, Matt is currently working as a producer at Shoot In China (SIC) which he owns with his business partner Clark Wang.

Matt studied Film & Literature at Warwick University, as well as theater production, stage design, and direction. After graduating from Warwick, he worked at the BBC for one year in production, during which he spent some time traveling to South America. It was in 2005 that he took the opportunity to teach English in China. Fast forward several years later, and Matt now runs a production company, Shoot In China (SIC) with his partner Clark Wang.

“It’s great to travel in China. I’ve discovered a lot of beautiful regions to shoot–from the top of mountains and plateaus to bamboo forests.”

Matt works mostly with local freelance directors, and occasionally directs himself. SIC offers production services and also produces its own content. Having a crew that speaks both English and Mandarin provides them with a strong competitive edge, allowing them to work with international companies all over Asia including Malaysia, Singapore, Taiwan, and Japan.

His favorite city? “I like the sense of dynamism in Shanghai. Every day is exciting and different. I’ve lived in one apartment complex housing 20,000 people, which is larger than my hometown in England!”

There are a lot of action-packed and creative shoots that are produced in China, and Matt’s shoot for Ballantine’s Whiskey was no exception. In November of 2014, Matt shot a music video that included 400 UV bulbs and 10,000 gallons of paint. A band performed one of their tracks while they were simultaneously being sprayed with 10 different colors, each color representing a different note. The piece was shot overnight inside a transparent box. Watch the video here. 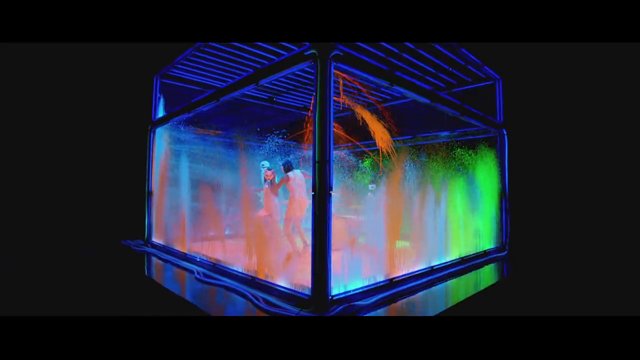