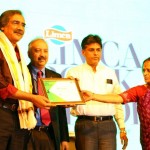 IQ member Mike Pandey was recently honored as one of the Limca Book of Records 2013 “People of the Year.” The theme of this year’s ceremony was “100 Years of Indian Cinema,” and Pandey’s award is rooted in a consistent contribution to “Indian excellence.”

Pandey has had a long and successful career in documentary filmmaking, specializing in films about wildlife and the environment. He has won over 300 awards for his work and has successfully spread awareness about biodiversity and species conservation, including helping to conserve and protect key species.

His films have led to various wildlife protection initiatives; most notably, his 2000 film Shores of Silence led to the ban of killing whale sharks on Indian shores, and his 2004 film Vanishing Giants led to the ban of cruel and outdated techniques of elephant capture in India. His powerful pieces are proof that films can make a difference locally, nationally, and globally.

Pandey shares his thoughts on the future of Indian documentary filmmaking in this article.